Nobody can be forbidden to use any arbitrarily producible event or object as a sign for something. (Frege 1892, "On Sense and Reference")

I want to define a language $\mathbf{L}_G$, which I'll also call the Guitar Language.

First let me stipulate (just for this context here)  that "$e$" be a name of my Epiphone guitar, and "$r$" be a name for my Rickenbacker guitar and "$y$" be a name for my Yamaha guitar. So, $e$, $r$ and $y$ are my guitars. (You do understand this! I have just temporally augmented your idiolect by a local baptism.)

This language $\mathbf{L}_G$ is a very simple "signalling language". It has only three symbols and no significant (i.e., combinatorial) syntax. The contents of the signals are (eternal) propositions (usually, of course, the content of a signal is indexical in some way, such as "The house is on fire right now!"). Now what would it mean for an agent (or mind) to speak/cognize the language $\mathbf{L}_G$? What would it mean for the mind of an agent to assign these propositions to these symbols?

It seems that the right thing to say is that an agent cognizes $\mathbf{L}_G$ by being disposed to perform the relevant speech act of $\mathbf{L}_G$ when in the right mental state; i.e., when a symbol is "asserted", then the propositional content of the agent's mental state is identical to the propositional content of the symbol. 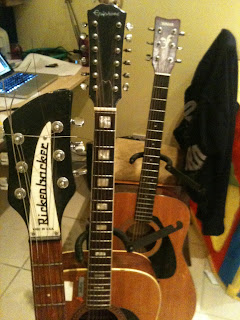 Published by Jeffrey Ketland at 7:52 pm