Joyce's argument for Probabilism: the mathematics

Under this representation, we have the following:


With that in hand, we can state Theorem 1, the mathematical core of Joyce's argument for Probabilism.  (In fact, the version we state here is slightly stronger than Joyce's; clause (2) is stronger.)

Theorem 1
In the first half of this post, we prove Theorem 1.  In the second half, we generalize it by showing that the same result holds for a large class of alternative functions other than $Q$.

The first step in the proof of Theorem 1 is the following Lemma, which is due to (de Finetti, 1974).  It gives an extremely useful characterization of the credence functions that satisfy Probabilism:  they are precisely those that are convex combinations of the omniscient credence functions in $\mathcal{V}$.

This characterization of $\mathcal{P}$, the set of probability functions on $\mathcal{F}$, makes our lives a lot easier, since there is a vast array of results about the behaviour of convex sets.  Here are the two that are important for our purposes:


So far, we've been assuming that distance between credence functions is measured by Squared Euclidean Distance.  Does Theorem 1 depend on that?  That is, is there a broader class of alternative measures of the distance between credence functions such that Theorem 1 holds for every distance measure in that class?  The first thing to say is that Squared Euclidean Distance is not itself a distance measure, strictly speaking:  that is, it isn't a metric.  It doesn't satisfy the triangle inequality.  It is rather what statisticians call a divergence.  In this section, we show that Theorem 1 holds for any Bregman divergence.  Squared Euclidean Distance is a Bregman divergence, but so is Kullback-Leibler divergence, the squared Mahalanobis distance, and Itakura-Saito distance.  And, as we will see, if an inaccuracy measure is generated by a proper scoring rule there is a Bregman divergence that differs from that inaccuracy measure by a constant.

Essentially, $d_F(y, x)$ is the difference between $F(y)$ and the first-order Taylor expansion around $x$ evaluated at $y$, as the following diagram illustrates: 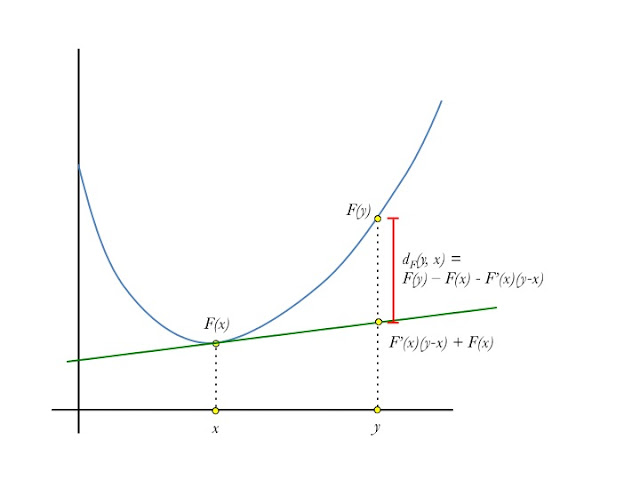 What follows are some of the crucial theorems concerning Bregman divergences.  Each shows that Bregman divergences share many important geometrical features with Squared Euclidean Distance.  We will be appealing to these various properties over the coming weeks.

Together, these are enough to show that Theorem 1 holds for any Bregman divergence.  Thus, if we can establish that distance between credence functions ought to be measured by a Bregman divergence, we can run Joyce's argument.

One consequence of this is that each probabilistic credence function expects itself to be most accurate.  The following result gives a partial converse to this.

Notice that $B(c, w)$ is obtained by taking the squared difference between each credence $c(X)$ and the corresponding ideal credence $v_w(X)$ and summing the results.  In this sort of situation, we say that $B$ is generated by a scoring rule.

We say that a scoring rule is proper if a particular credence expects itself to be more accurate than it expects any other credence to be.  More precisely:

Then we have the following theorem, which connects the inaccuracy measures generated by proper scoring rules and Bregman divergences.

Published by Richard Pettigrew at 12:02 pm