Often, we wish to aggregate the probabilistic opinions of different agents. They might be experts on the effects of housing policy on people sleeping rough, for instance, and we might wish to produce from their different probabilistic opinions an aggregate opinion that we can use to guide policymaking. Methods for undertaking such aggregation are called pooling operators. They take as their input a sequence of probability functions $c_1, \ldots, c_n$, all defined on the same set of propositions, $\mathcal{F}$. And they give as their output a single probability function $c$, also defined on $\mathcal{F}$, which is the aggregate of $c_1, \ldots, c_n$. (If the experts have non-probabilistic credences and if they have credences defined on different sets of propositions or events, problems arise -- I've written about these here and here.) Perhaps the simplest are the linear pooling operators. Given a set of non-negative weights, $\alpha_1, \ldots, \alpha_n \leq 1$ that sum to 1, one for each probability function to be aggregated, the linear pool of $c_1, \ldots, c_n$ with these weights is: $c = \alpha_1 c_1 + \ldots + \alpha_n c_n$. So the probability that the aggregate assigns to a proposition (or event) is the weighted average of the probabilities that the individuals assign to that proposition (event) with the weights $\alpha_1, \ldots, \alpha_n$.

Linear pooling has had a hard time recently. Elkin and Wheeler reminded us that linear pooling almost never preserves unanimous judgments of independence; Russell, et al. reminded us that it almost never commutes with Bayesian conditionalization; and Bradley showed that aggregating a group of experts using linear pooling almost never gives the same result as you would obtain from updating your own probabilities in the usual Bayesian way when you learn the probabilities of those experts. I've tried to defend linear pooling against the first two attacks here. In that paper, I also offer a positive argument in favour of that aggregation method: I argue that, if your aggregate is not a result of linear pooling, there will be an alternative aggregate that each experts expects to be more accurate than yours; if your aggregate is a result of linear pooling, this can't happen. Thus, my argument is a non-pragmatic, accuracy-based argument, in the same vein as Jim Joyce's non-pragmatic vindication of probabilism. In this post, I offer an alternative, pragmatic, Dutch book-style defence, in the same vein as the standard Ramsey-de Finetti argument for probabilism.

My argument is based on the following fact: if your aggregate probability function is not a result of linear pooling, there will be a series of bets that the aggregate will consider fair but which each expert will expect to lose money (or utility); if your aggregate is a result of linear pooling, this can't happen. Since one of the things we might wish to use an aggregate to do is to help us make communal decisions, a putative aggregate cannot be considered acceptable if it will lead us to make a binary choice one way when every expert agrees that it should be made the other way. Thus, we should aggregate credences using a linear pooling operator.

We now prove the mathematical fact behind the argument, namely, that if $c$ is not a linear pool of $c_1, \ldots, c_n$, then there is a bet that $c$ will consider fair, and yet each $c_i$ will expect it to lose money; the converse is straightforward. 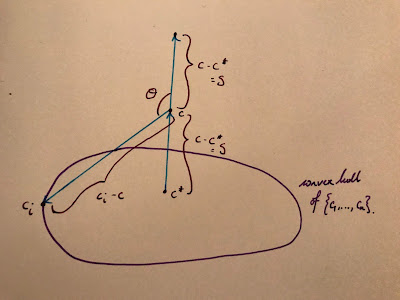 Published by Richard Pettigrew at 8:39 pm