Representing the hyperbolic plane with crochet

The summer break is officially over for me since Monday, but it's been difficult to find time to resume blogging here at M-Phi; I have lots of ideas for posts, but other pressing and time-consuming tasks keep interfering with my plans!

But anyway, here's a post at long last. So, one of the things I did during the summer break was to read Alex Bellos' Alex's Adventures in Numberland. (I'm your typical happy nerd: I read popular science books during the holidays...) It's a highly enjoyable book, which I am sure would interest even people who know a lot more math than the author himself. What I like about Bellos' books (as in his previous book on Brazilian football, Futebol) is that he brings in 'the human factor' in a empathetic, funny and insightful way, so the book is about math in all its different manifestations in people's lives. It ranges from high-level professional math to recreational math, going through gambling and numerology. I hope to be able to write a more extensive review of the book for M-Phi soon. (Ok, I'm not exactly neutral: a guy who loves math, loves Brazil and writes well, what's there not to like about him?)

One of the things I learned in the book is that the most successful technique so far for representing the hyperbolic plane is with crochet; yes, you heard me (well, read me), crochet. Here's a first sample: 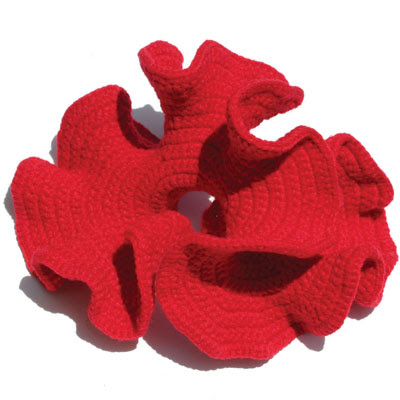 The history of the discovery of hyperbolic planes is well known: in the 19th century, non-Euclidean geometry was discovered independently by Bolyai and Lobachevsky, and entailed (among many other things) that there are three kinds of planes/surfaces, depending on the number of lines parallel to a given line passing through a point not in that line: flat planes (which are described by Euclidean geometry -- exactly one line); spherical planes (no line); and hyperbolic planes (infinite number of lines).

Representing/visualizing flat and spherical planes was a piece of cake; flat planes was what geometers had been talking about for thousands of years, and spherical planes define for example the 'geometry' of the Earth (latitudes and longitudes). But "the challenge of visualizing the hyperbolic plane galvanized many mathematicians in the final decades of the nineteenth century." (Bellos 2010, 392) Poincare' had a good try with his disc model, which later provided inspiration for some beautiful woodcuts by Escher:

While clever, Poincare's disk model was still not sufficiently realistic. Mathematicians almost despaired of ever finding more realistic models when Hilbert proved in 1901 that it is impossible to describe a hyperbolic surface using a formula (this Hilbert guy, he just keeps popping up everywhere!). In practice, this also means that computers cannot create images of hyperbolic surfaces in a straightforward way (but I can imagine that, with some 'cheating', one could get close enough).

It was only in the 1970s that systematic attempts at representing hyperbolic planes were made again, and this time on a much more low-tech level, by Fields medalist Thurston. He construed paper models of hyperbolic planes, sticking together horseshoe-shaped slivers of paper. But the models would fall apart as soon as one would manipulate them, which didn't really help in terms of giving people a 'feel' for what hyperbolic planes look like.

But Thurston's attempt inspired mathematician Daina Taimina to think of a different, less fragile material to be used for representing hyperbolic planes. She first experimented with knitting, but it turned out not to be very appropriate for the enterprise (don't ask me, knitting is like rocket-science to me), so she switched to crochet. And thus were born the first crochet representations of hyperbolic planes! (That was in 1997.) The basic idea is the following: "start with a line of stitches, and then for each subsequent line add a fixed amount relative to the number of stitches on the line before. [...] This, she [Taimina] hoped, would create a piece of fabric that became wider and wider -- as if expanding out from itself hyperbolically." (Bellos 2010, 395)

Hyperbolic crocheting is now a important trend in crocheting circles, and perhaps slightly closer to the interests of M-Phi readers, it has had significant implications for the study of the geometry of hyperbolic planes. If nothing else, it gives mathematicians and students the chance to 'experience' something they only conceived of in purely theoretical, 'formalistic' ways: "Oh, so this is what a horocycle looks like!" But one can also do serious math in connection with crochet models of hyberbolic planes, as explained in a paper co-authored by Taimina and her husband David W. Henderson (both professors of mathematics at Cornell).

There are so many things I like about the idea of representing the hyperbolic plane with crochet. First, I am of course delighted that a craft traditionally associated with the female half of the humanity is used to make such an important contribution to mathematics. Second, it is a very nice case study of the interplay between 'doing the math' and visualizing a given concept such as that of hyperbolic planes, which is in first instance so far removed from what we can 'normally' represent. And finally, the crochet models are simply beautiful things! They look like corals, which is not surprising given the tendency in living beings to develop in a 'hyperbolic' way when they need to maximize their surface of contact with the external world. Just do a google images search with 'hyperbolic crochet' to see many more beautiful samples.
Published by Catarina at 8:51 am