In this post, I’m going to continue my crusade against certain revisionist approaches to logic in response to paradoxes, which I consider to be insufficiently motivated. I’ve talked about some of my objections in a few previous posts (here for example), but the main point is ultimately that any rejection of a rule of inference or structural rule on the grounds that ‘it leads to paradox’ seems to me to require additional, independent motivation. Let me hasten to add that I have no particular fondness for classical logic, and thus my critique is not motivated by general anti-revisionist inclinations. But I am suspicious of what can be described as ‘fix-up’ solutions, which among other things sidestep the opportunity of engaging in serious reflection on the exact nature of paradoxical phenomena, and what they tell us about some of our most basic logical concepts.

Currently, a popular revisionist strategy is to go substructural: rather than ‘ditching’ one of the usual rules of inference (say, modus ponens), what has to go is one of the plausible structural principles underlying (often tacitly) classical logic and many other logical systems. In particular, recently the rule of contraction has been presented as the paradoxical culprit by several people such as JC Beall, Elia Zardini and Ole Hjorland, who then go on to argue in favor of contraction-free logical systems, or else for restrictions on contraction. Contraction is the rule that says that, if you can infer C from A, A and B, then you can infer C from A and B: the number of occurrences of copies of a given premise is irrelevant for validity. In natural deduction settings, this means that one can assume a given formula as many times as one wants, and then discharge all the assumptions in one go, with just one application of implication introduction.

It is argued that many (if not all) derivations of paradoxes, such as the Liar or Curry, make crucial use of multiple discharge, and thus of the structural rule of contraction. See for example this derivation of Curry’s paradox (borrowed from a draft paper by Ole Hjortland - sorry for the terrible resolution!): 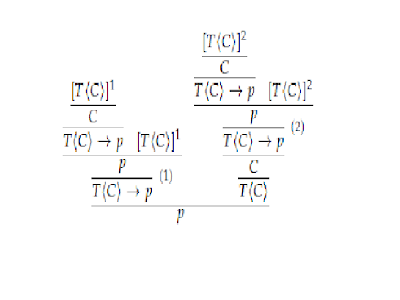 The key point is that, both on the right branch and on the left branch, two occurrences of the assumption [T<C>] are discharged with one occurrence on each side of implication introduction. To be sure, it is certainly an interesting observation that contraction seems to be involved in all these paradoxical derivations, but is this enough to justify rejecting and/or restricting contraction with no further argumentation? I submit that it is not.

What could count as a more robust argument against contraction, beyond the observation that it seems to be involved in typical derivations of logical paradoxes such as the Liar and Curry? As I see it, the question to be asked is: what made us think that contraction was a plausible principle in the first place? If we can go back to the original reasons to endorse contraction and find fault in them, then we might have independent motivation to reject the principle, other than the fact that it seems to be involved in paradoxical derivations. Either way, this is an opportunity to reflect critically on some of the very building blocks of our conception of logic.

Now, if necessary truth-preservation is both a necessary and sufficient condition for validity, it is hard to see what could possibly be wrong with contraction: if A, A, B => C is a valid consequence, then so is A, B => C, as the collection of premises {A, A, B} is verified by exactly the same situations as the collection of premises {A, B}. Similarly, on the dialogical conception of logic that I’ve been developing recently, once a premise A has been stated and accepted by the participants in the dialogical game in question, participants (proponent in particular) can help themselves to A as many times as they wish: it becomes a commonly owned and permanently available commodity as it were (it doesn’t ‘wear out’).

In my opinion, the thus far most convincing rejection of contraction is the one of linear logic, which, as a logic of resources, is sensitive to the number of copies of a given formula available: once used, the particular copy of the formula is no longer available. There may be other plausible reasons why a given logic will be sensitive to resources in this way, e.g. some logics of information. But these are all independent motivations to reject or restrict contraction, unrelated to paradoxes.

But specifically with respect to paradoxes, an interesting avenue to be pursued might be to investigate what exactly is problematic about the particular occurrences of contraction in the paradoxical derivations in question. At the Q&A after Ole’s talk last week at the FLC conference in St. Andrews, Peter Schroeder-Heister made an interesting observation: as it turns out, in every case of multiple discharge in these paradoxical derivations, the two (or more) occurrences of a given formula are heterogeneous in that one is assumed and then undergoes an application, while the other is simply assumed. This can be observed in the derivation above: in both branches, the first assumption of [T<C>] is then ‘developed’ into C, and subsequently into [T<C>] à p (which is by definition what C means), while the second assumption of [T<C>] does not undergo such a process. (As pointed out by Peter Schroeder-Heister, this kind of ‘heterogeneity’ is not observed in occurrences of multiple discharge in the derivation of e.g. the law of excluded middle.) So perhaps there is something problematic about this particular kind of multiple discharge, which is somewhat ‘incestuous’ in that a formula is assumed and then ‘applied’ to itself (or to its descendants) again.

[UPDATE: Shawn Standefer writes to draw my attention to a 2007 paper by Sue Rogerson in JPL that is highly relevant for the present discussion, 'Natural deduction and Curry's paradox'. Among other things, Rogerson reports (p. 159) that Fitch made a remark very similar to Schroder-Heister's:

He noticed that there was an unusual feature in the proof of the paradox: Namely, that the same formula is used both as a hypothesis for a subordinate proof and then again later as a minor premise in an application of àE.

She then goes on to discuss four different strategies considered by Fitch to deal with the phenomenon. Anyone interested in restrictions to contraction prompted by paradoxes must absolutely read this paper!]

Such observations might lead to systems which are not contraction-free, strictly speaking, but where contraction is restricted – hopefully on the basis of some robust principles rather than an ad-hoc restriction ‘whenever needed’ (i.e. to block paradoxes). This is indeed what Elia Zardini proposes in his recent RSL paper, namely an independently motivated restriction of contraction. As I said before, Elia’s proposal is to my mind the most compelling case for paradox-related contraction restriction currently in the market.

A final worry for the proponents of contraction-free systems is the extent of the loss incurred by the rejection of contraction (a point made by Stephen Read). Without contraction, can we still prove some of the results that we’ve learned to love and cherish, such as Cantor’s or Gödel’s? If not, can we live without them? Ultimately, it may well be that keeping a naïve conception of truth and ending up with an exceedingly weak logic (if that’s indeed the case) might not be such a good idea after all: the treatment may be more destructive than the disease itself. In other words: can we do without contraction, and if yes, should we? At any rate, I for one need paradox-unrelated reasons to convince me of giving up on contraction.
Published by Catarina at 5:26 pm