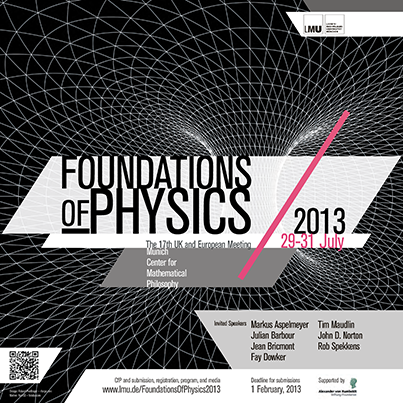 FOUNDATIONS OF PHYSICS 2013
The 17th UK and European Meeting

This conference will consider topics across the entire spectrum of foundational and philosophical approaches to physical theory. Whilst there will be a particular focus upon the analysis of specific physical theories (e.g. classical and quantum theories of spacetime, quantum mechanics, quantum field theory, statistical physics), we also invite submissions on methodological questions, experimental practices, and the study of philosophically interesting episodes from the history of physics. It is hoped that bringing together philosophers of physics, historians of physics, and working physicists to discuss topics of mutual interest, will be of great benefit to practitioners of each discipline.

We invite submissions of extended abstracts of 1000 words for contributed talks and proposals for symposia by 1st February 2013. Decisions will be made by 1st March 2013.

GRADUATE FELLOWSHIPS: A few travel bursaries for graduate students are available (up to 500 Euro). See website for details.
Published by Unknown at 5:15 pm