How inaccurate is your total doxastic state?

Of course much of the epistemological literature is concerned with agents who have quite different sorts of doxastic attitudes.  It is concerned with agents who have not credences, which we might think of as partial beliefs, but rather agents who have full or all-or-nothing or categorical beliefs.  One might wonder whether we can also describe ways of measuring the inaccuracy of these doxastic attitudes.  It turns out that we can.  The principles of rationality that follow have been investigated by (amongst others) Hempel, Maher, Easwaran, and Fitelson.  I'll describe some of the inaccuracy measures below.

This raises a question.  Suppose you think that credences and full beliefs are both genuine doxastic attitudes, neither of which can be reduced to the other.  Then it is natural to think that the inaccuracy of one's total doxastic state is the sum of the inaccuracy of the credal part and the inaccuracy of the full belief part.  Now suppose that you think that, while neither sort of attitude can be reduced to the other, there is a tight connection between them for rational believers.  Indeed, you accept a normative version of the Lockean thesis: that is, you say that an agent should have a belief in $p$ iff her credence in $p$ is at least $t$ (for some threshold $0.5 < t \leq 1$) and she should have a disbelief in $p$ iff her credence in $p$ is at most $1-t$.  Then it turns out that something rather unfortunate happens.  Joyce's accuracy dominance argument for probabilism described above fails.  It now turns out that there are non-probabilistic credence functions with the following properties: while they are accuracy-dominated, the rational total doxastic state that they generate via the normative Lockean thesis -- that is, the total doxastic state that includes those credences together with the full beliefs or disbeliefs that the normative Lockean thesis demands -- is not accuracy-dominated by any other total doxastic state that satisfies the normative Lockean thesis.

Let's see how this happens.  We need three ingredients:

Second, the measure is proper.  That is, each probabilistic set of credences expects itself to be amongst the least inaccurate.

Third, as mentioned above, there are non-probabilistic credence functions that are not accuracy-dominated when inaccuracy is measured by $I_t$.  Consider the following example.
Then we have the following result:  There is no total doxastic state that satisfies the Lockean thesis that $I_t$-dominates $c$.

The following figure helps us to see why. 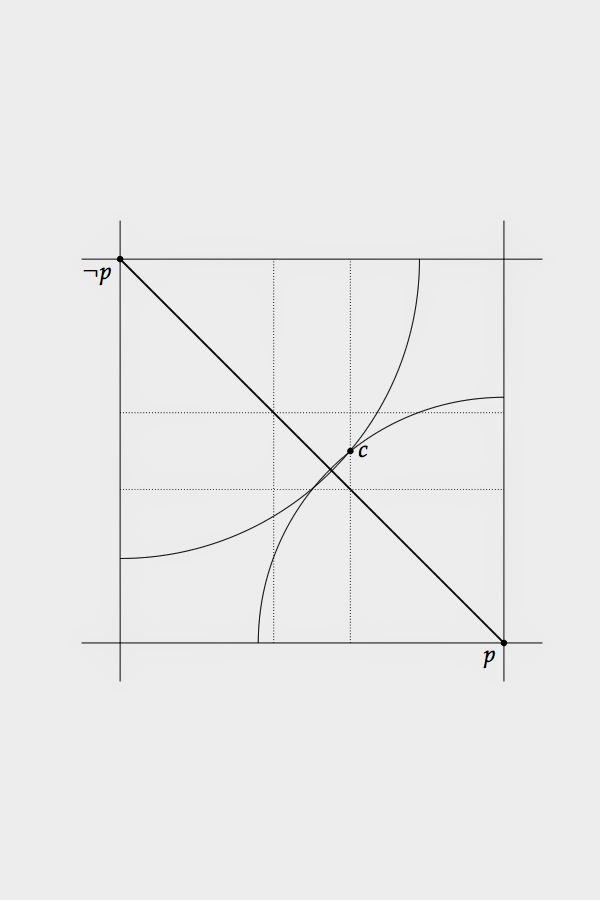 Note that, in line with Joyce's accuracy-domination argument for probabilism, $c$ is $I$-dominated.  It is $I$-dominated by all of the credence functions that lie between the two arcs.  Some of these -- namely, those that also lie on the diagonal line -- are not themselves $I$-dominated.  This seems to rule out $c$ as irrational.  But of course, when we are considering not only the inaccuracy of $c$ but also the inaccuracy of the beliefs and disbeliefs to which $c$ gives rise in line with the Lockean thesis, our measure of inaccuracy is $I_t$, not $I$.  Notice that all the credence functions that $I$-dominate $c$ do not $I_t$-dominate it.  The reason is that every such credence function assigns $X$ a credence less than 0.6.  Thus, none of them give rise to a full belief in $X$.  As a result, the decrease in $I$ that is obtained by moving to one of these does not exceed $R$, which is the accuracy 'boost' obtained by having the true belief in $X$ to which $c$ gives rise.  By checking cases, we can see further that no other credence function $I_t$-dominates $c$.

Is this a problem?  That depends on whether one takes credences and beliefs to be two separate, but related doxastic states.  If one does, and if one accepts further that the Lockean thesis describes the way in which they are related, then $I_t$ seems the natural way to measure the total doxastic state that arises when both are present.  But then one loses the accuracy-domination argument for probabilism.  However, one might avoid this conclusion if one were to say that, really, there are only credence functions; and that beliefs, to the extent they exist at all, are reducible to credences.  That is, if one were to take the Lockean thesis to be a reductionist claim rather than a normative claim, it would seem natural to measure the inaccuracy of a credence function using $I$ instead of $I_t$.  While one would still say that, as a credence in $X$ moves across the Lockean threshold for belief, it gives rise to a new belief, it would no longer seem right to think that this discontinuous change in doxastic state should give rise to a discontinuous change in inaccuracy; for the new belief is not really a genuinely new doxastic state; it is rather a way of classifying the credal state.

Published by Richard Pettigrew at 8:08 am