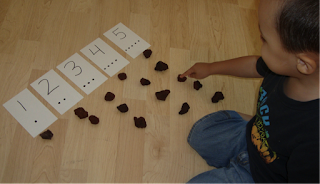 Put two apples on a bare table, see that no one comes near them and nothing shakes the table; now put another two apples on the table; now count the apples that are there. You have made an experiment; the result of the counting is probably 4. (We should present the result like this: when, in such-and-such circumstances, one puts first 2 apples and then another 2 on a table, mostly none disappear and none get added.) And analogous experiments can be carried out, with the same result, with all kinds of solid bodies.---This is how our children learn sums; for one makes them put down three beans and then another three beans and then count what is there. If the result at one time were 5, at another 7 (say because, as we should now say, one sometimes got added, and one sometimes vanished of itself), then the first thing we said would be that beans were no good for teaching sums. But if the same thing happened with sticks, fingers, lines and most other things, that would be the end of all sums.
“But shouldn’t we then still have 2 + 2 = 4?”---This sentence would have become unusable.

What Wittgenstein seems to be saying here, among other things, is that the practice of counting is useful only insofar as certain conditions are in place, in particular the discreteness (so that they can be counted) and perdurance of objects, which ensures that collections of objects have a stable numerical value when no external interference occurs. If objects would regularly fuse and multiply, or appear and disappear spontaneously, then counting and doing sums would not be a very meaningful, useful (usable!) practice at all. (This also means that the practice of counting is not a purely arbitrary construction; its fruitfulness depends crucially on how things happen to be in the world.)

In fact, the stability of objects in this sense may be a necessary condition for the meaningfulness of the practice of counting, but it still does not seem to be a sufficient condition. Recent anthropological work by Pica and others argues that some tribes in the Amazon speak languages that do not have words for counting beyond 2 or 3, as beyond that counting words are not used in any consistent way. In terms of the metaphysical properties of objects, members of these cultures live the same world as ours, and yet for various reasons the need for the practice of counting seems not to have emerged in these cultures. Indeed, when given tests with simple arithmetical operations with exact quantities, members of this culture perform ‘poorly’ for our standards; this seems like a clear win for Wittgenstein on counting. (Notice that they perform just fine when it comes to tasks involving approximations.)

Recent developmental work on numerical cognition also seems to lend support to the Wittgensteinian view of counting as training. While there is still much debate on the extent to which infants and very young children have some ‘innate’ sense of quantities, quite some results suggest that mastery of the practice of counting in exactly the way we do it – that is, based on the concept of a linear progression of the natural numbers, where the difference between 1 and 2 is ‘the same’ as the difference between 9 and 10 – requires extensive training, and becomes fully established only once children have been suitably ‘indoctrinated’, typically by formal schooling.

The upshot is thus that, pace the Jackson brothers, there is nothing easy about 1, 2, 3 – something that the later Wittgenstein already knew all too well, and which has been recently corroborated by anthropological as well as developmental research on numerical cognition. To be sure, there are still competing theories on numerical cognition among psychologists and cognitive scientists, and some of them are closer to the Wittgensteinian conception of counting as a language game requiring extensive training than others. But many of Wittgenstein’s insights have been borne out by recent research, which means that they provide an empirically-motivated starting point for a fully-fledged philosophical account of counting and basic arithmetic.

(This is a piece written for Qualia, the student-run magazine at the Faculty of Philosophy in Groningen.)