In my last couple of posts (here and here), I've been discussing decision rules for situations in which probabilities over the possible states of the world are not available for some reason. Perhaps your evidence is too sparse, and points in no particular direction, or too complex, and points in too many. So subjective probabilities are not available. And perhaps you simply don't know the objective probabilities. In those situations, you can't appeal to standard subjective expected utility theory of the sort described by Ramsey, Savage, Jeffrey, etc., nor to objective expected utility theory of the sort described by von Neumann & Morgenstern. What, then, are you to do? As I've discussed in the previous posts, this was in fact a hot topic in the early days of decision theory. Abraham Wald discussed the Maximin approach, Leonid Hurwicz expanded that to give his Criterion, Franco Modigliani mentioned Maximax approaches, and Leonard Savage discussed Minimax Regret. Perhaps the culmination of this research programme was John Milnor's elegant 'Games against Nature' in 1951 (revised in 1954), where he provided simple axiomatic characterisations of each of these decision rules. In the first post on this, I pointed out a problem with Hurwicz's approach (independently noted in this draft paper by Johan Gustafsson); in the second, I expanded that approach to avoid the problem.

Perhaps unsurprisingly, my interest in these decision rules stems from the possibility of applying them in accuracy-first epistemology. On that approach in formal epistemology, we determine the rationality of credences by considering the extent to which they promote what we take to be the sole epistemic good for credences, namely, accuracy. And we make this precise by applying decision theory to the question of which credence functions are rational. Thus: first, in place of the array of acts or options that are the usual focus of standard applications of decision theory, we substitute the different possible credence functions you might adopt; second, in place of the utility function that measures the value of acts or options at different possible states of the world, we substitute mathematical functions that measure the accuracy of a possible credence function at a possible state of the world. Applying a decision rule then identifes the rationally permissible credence functions. For instance, in the classic paper by Jim Joyce in 1998, he applies a dominance rule to show that only probabilistic credence functions are rationally permissible.

Now, one of the central questions in the epistemology of credences is the problem of the priors. Before I receive any evidence at all, which credences should I have? What should my ur-priors be, if you like? What should a superbaby's credences be, as David Lewis would put it? Now, people have reasonable concerns about the very idea of a superbaby -- this cognitive agent who has no evidence whatsoever but is nonetheless equipped with the conceptual resources to formulate a rich algebra of propositions. Evidence and conceptual resources grow together, after all. However, the problem of the priors arises even when you do have lots of evidence about other topics, but take yourself to have none that bears on a new topic in which you have yet to set your credences. And indeed it arises even if you do have credences that bear on the new topic, but you don't think they are justified, or they're inadmissible for the purpose to which you wish to use the credences -- for instance, if you are a scientist producing the priors for the Bayesian model you will use in your paper. So I think we needn't see the superbaby as a problematic idealization, but as a way of representing a situation in which we in fact quite often find ourselves.

So, what credences should a superbaby choose? The key point is that they have no recourse to any subjective or objective probabilities. So they can't appeal to expected accuracy to set their credences. Thus, we might naturally look to Wald, Hurwicz, Milnor, etc. to see what they might use instead. In this paper from 2016, I explored what Maximin requires, and in this follow-up later that year, I explored what the Hurwicz Criterion mandates. In this post, I'd like to explore what the Generalized Hurwicz Criterion stated in the previous blogpost requires of your credences. Let's remind ourselves of this decision rule.

So $\alpha_1$ weights the best-case utility, $\alpha_2$ the second best, and so on down to $\alpha_n$, which weights the worst-case utility. We then sum these weighted utilities to give the generalised Hurwicz score and we choose in order to maximise this.

So the accuracy of your credence function at a world is the sum of the accuracy at that world of the credences that it assigns. 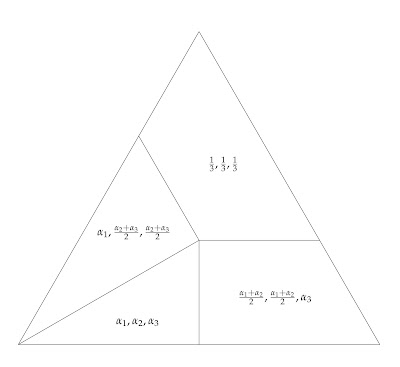 To finish, some interesting points about this:

Second, in my earlier paper, I noted that Maximin demands the uniform distribution. So you might see the uniform distribution as the maximally risk-averse option. And indeed you can read something like that into William James' remark that the person who always suspends judgment has an irrational aversion to being a dupe. But actually it turns out that quite a wide range of attitudes to risk--in this case represented by generalised Hurwicz weights in the upper trapezoid region--demand the uniform distribution.

Third, in my first blogpost about all this, I criticized Hurwicz's original version of his criterion for being incompatible with a natural dominance norm, which says that if one option is always at least as good as another and sometimes better, then it should be strictly preferred. Suppose we apply this strengthening to Weak Dominance in our characterization of the Generalized Hurwicz Criterion in the previous blogpost. Then we obtain a slightly more demanding version of the Generalized Hurwicz Criterion that requires that each of your Hurwicz weightings is strictly positive. And if we do that, then it's no longer true that any probabilistic credence function can be rationalised in this way. Only regular ones can be. So that plausible strengthening of Weak Dominance leads us to an argument for Regularity, the principle that says that you should not assign extremal credences to propositions that are not tautologies or contradictions.
Published by Richard Pettigrew at 6:58 am